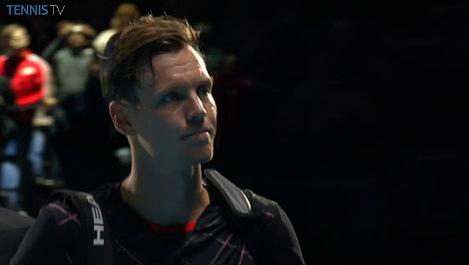 Q. Just a few words about Novak, if you can, sealing the year end No. 1 spot today.
TOMAS BERDYCH: Well, definitely he deserves to win. There was no question about it. He just secure his spot for the No. 1 player in the world. I think it just show how great he is, how well he played during the whole season. Yeah, that’s it.
I mean, there was not much doubts that the match could go the other way. There was nothing the way I can challenge him better than this.

Q. Probably seem as silly question, but if Wawrinka goes into meltdown tonight and loses, it’s possible you can qualify for the semifinals.
TOMAS BERDYCH: No.

Q. A little disappointing end of the year, but what is your opinion of having this event move to another city in the future or staying here more years?
TOMAS BERDYCH: Let’s separate the question a little bit. Yes, the season was solid, was very good. Was another year to finish in top eight, that’s great. The other one is the last week of the season was terrible. That’s how it is.
If moving or not, really I’m probably not the one who can decide that and can have the powerful word.
I think it’s been already pretty a while here. Who knows. Maybe the change can bring something else, you know, bring some new spectators or just a different part of the world.
But I think it’s quite still open in that. But there is definitely nothing that we can criticize that we are missing or they are not doing well here.

Q. Can you say anything about why it’s so hard for players to stay in the matches once they fall behind?
TOMAS BERDYCH: Well, I don’t know what’s the explanation. But there could be also something about the surface, you know. I’ve been asked many times if it’s the same or not. But it’s always hard to judge when you go during the year, and every single indoor tournament is a bit different.
It’s hard to remember how was the surface one year ago when you play 15 tournaments in between on the hard courts.
But I find the court very tricky, very challenging. It doesn’t allow you for any mistakes. In my word, I think it’s very slow. You know, for us who wants to hit the serve and try to play aggressive, it’s very difficult. So that’s why we kind of struggle with that.
You facing the best players in the world. So when you put these things together, then the scissors opens too much and then it creates the scores how it is.

Q. You’ve had experience the last couple years going from this tournament to the Davis Cup final. Wawrinka and Federer are going to have that experience this year. Can you talk about what that transition is like, changing focus from this to a different kind of event.
TOMAS BERDYCH: Yes, it’s very difficult. It’s very hard transition because it’s two big events, one next to each other. It’s really not an easy one.
Somehow I managed twice to go the next week and win and play a good tennis. I’m really happy with those two wins in Davis Cup. Not many teams, I would say such a small team, that could make it two years in a row. Every time after a season like that, which is extremely tough and not easy.
So, well, I think they are both very experienced. They going to handle that. They just need to first finish here and then, you know, refocus and be ready for another big event.

Q. Marin Cilic said the other day how tough playing Djokovic in the first match of the tournament. You played him in the last match of the round robin. Do you think it’s even tougher to handle because you are under pressure to try to many games as you could?
TOMAS BERDYCH: Well, you are under pressure from the beginning of the tournament, no matter if it’s the first or last match. If you play Novak first or last, it’s pretty much the same. There is not much difference.
Especially here, you know, he’s been fighting for being No. 1 in the world. This match just secures him that. Really, I don’t see a big difference between the first or last.
Yeah, I mean, it’s extremely tough to play him.

Q. Talk a little bit about your off season, what you’re going to be working on. Is it an important one for you to try to make some big changes or not?
TOMAS BERDYCH: Well, it’s hard to say ‘big changes’. First of all, there is going to be time just to get myself rest, prepared, relaxed. You know, that’s the first step to try to start it all over again.
Then my main goal definitely is going to be, I would say, fitness and movement. It’s still becoming more and more important in the game.
No matter how challenging are those guys, it’s always very important how my game is. If I’m able to move well, hitting the ball nice and clean, which goes very well together, then that’s the beginning of the success. So that’s going to be definitely the start up.
Yeah, I mean, follow up on the other things, as well. You know, I think it’s too soon just now to talk what’s going to be my plans in off season basically like what to work on and what to do.
But, yeah, I’m going to have, I would say, maybe one week more because the last two years play always Davis Cup. That was extremely tough. But, yeah, the good thing is that I’m not 20 year kid that needs more time, can work on much more things. But there is still a lot to improve.

Q. You’re older than Nadal, Murray and Djokovic. You’re four years younger than the No. 2 player in the world. Where tennis is going, do you think you’re around your prime age? Is your peak still to come? Are you already past your prime given where the sport is now?
TOMAS BERDYCH: Well, okay, so let’s forget the last one that you said because he is not from this world. That’s really no question about it.
Well, for myself, I take every year as a new challenge. It’s how it is. I just try to push it as far as I can, get myself as close as possible to my limits. Probably you can find it out when you are done. It’s really hard to say in the middle not anymore in the middle of the career, but in the career or during your play if that was the best or if you are still able to bring something more.
I mean, you can always come up with matches that you can handle a different way. You can have more experience and you can still winning a big matches or you can lose them also because of maybe, I don’t know, your fitness is not so great like it was when you were 20 or something like that. Just examples.
But hopefully this is not the case. It’s always a matter of having some goals and having some plans and just go for it. 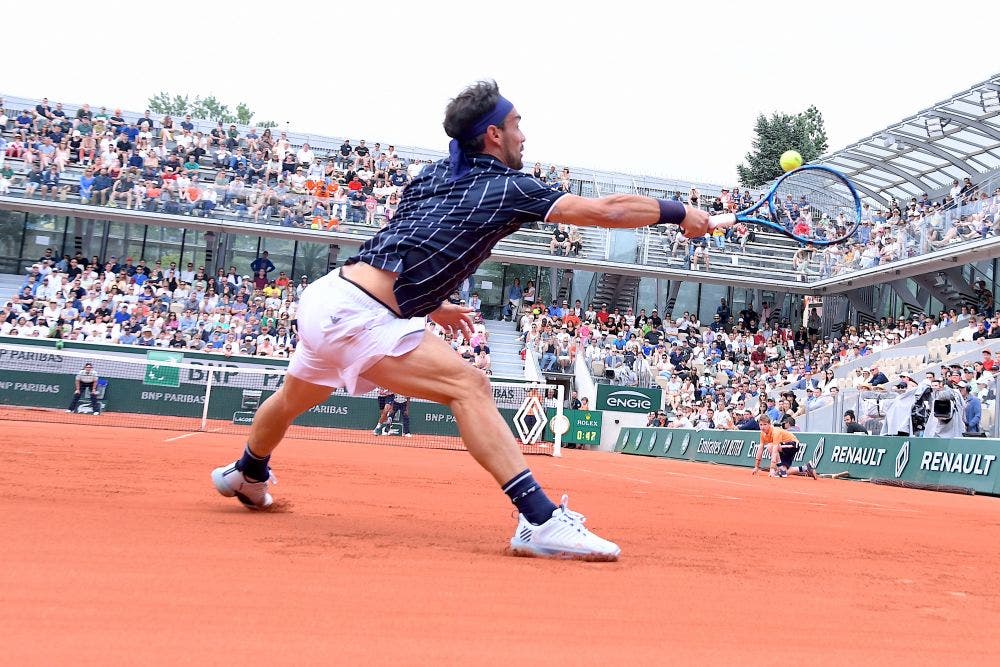 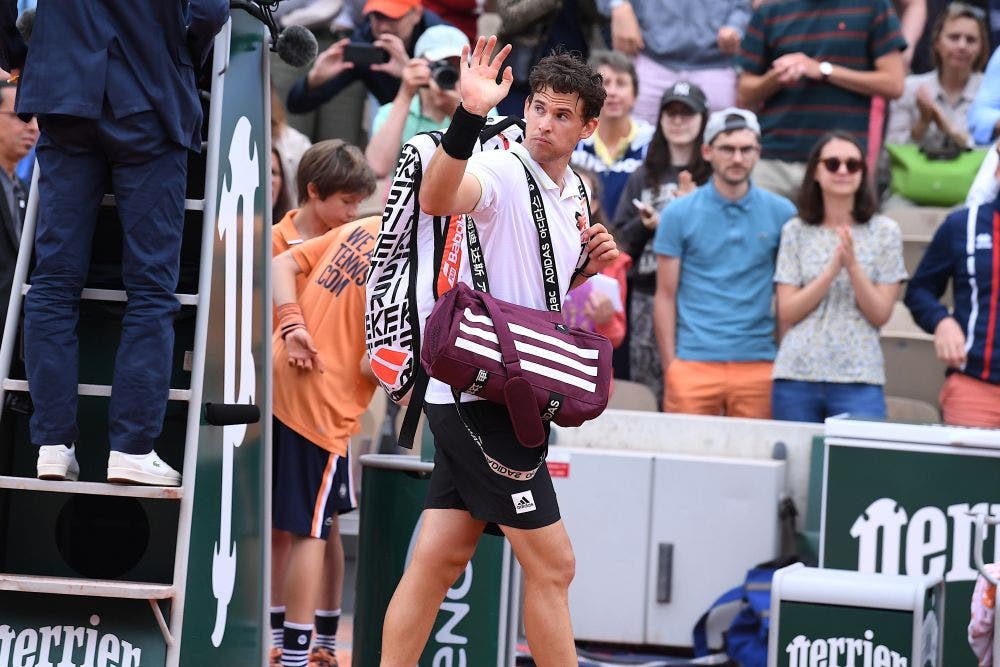 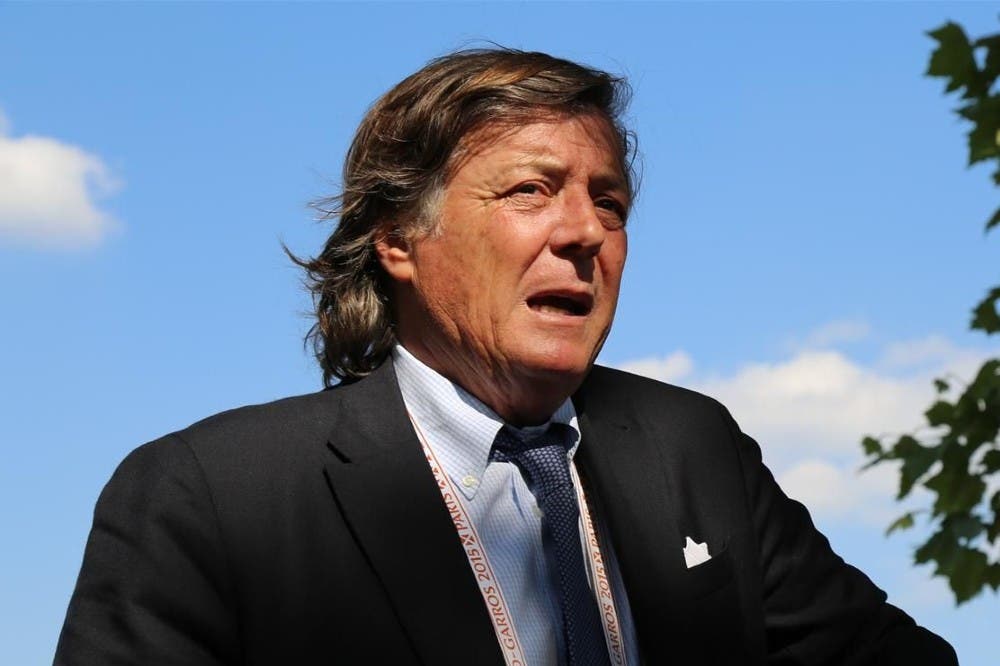